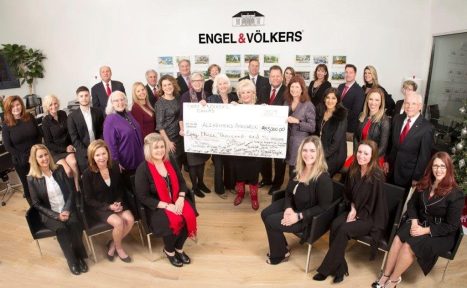 DALLAS – Dec. 13, 2017 – Engel & Völkers and the Alzheimer’s Association have announced the sale of the 2017 Dallas Decorators Showhouse and confirmed that $83,000 was raised to benefit the Alzheimer’s Association in its fight against the disease. Sponsors and participants included Traditional Home magazine, Marina Bay Development Corp., Donna Moss, Engel & Völkers Real Estate, Tasker Agency, 24 interior designers, and more than 30 notable brand sponsors.

The nearly 8,000 square foot home in Southlake, Texas was completed earlier this year by local Texas real estate developer, Paul Moss, president of Marina Bay Development Corp. The Showhouse, presented by Traditional Home magazine and HGTV show host, Donna Moss, was decorated by a group of local and national interior designers secured by the editors of the magazine. The home was opened to the public for tours this past fall, with proceeds from ticket sales directly benefitting the Alzheimer’s Association. When the viewing was concluded, the house was sold by Engel & Völkers. Roxann Taylor owner and broker of Engel Völkers Dallas along with her entire team, marketed the home from May 2017 and hosted buyers in the home for showings until September 2017. Upon the sale of the Showhouse, Taylor and her entire Engel Völkers team generously donated $83,000 of their commission from the sale of the property.

“This gift from Roxann Taylor is an exceedingly generous level of financial support for the mission of the Alzheimer’s Association,” said Theresa Hocker, executive director for the Alzheimer’s Association – North Central Texas Chapter. “We are grateful that Roxann understands the importance of the work we do in fighting this disease, both on the research front, and in terms of the local services we provide those who are dealing with Alzheimer’s disease every day.”

“Having passion in life to make a difference in the lives of others was the foremost thought when my Southlake shop embraced the Showhouse Project in support of financial aid to the Alzheimer’s Association,” said Roxann Taylor. “Each one of my real estate advisors, along with our entire firm with shops in 35 countries around the world, have one common goal and that is to passionately deliver excellence in everything we do and the involvement in the Showhouse over this last year allowed us the opportunity to do just that. We are exceedingly proud to have contributed our time and expertise and financial support to make that difference in the lives of others.”

Traditional Home Publisher Beth McDonough agrees with Taylor’s sentiment. “Our National Showhouse Tour has been raising money for national and local charities for over 20 years. We are honored to have been part of such an incredible project and to have helped the North Central Texas and Houston Southeast Texas chapters of the Alzheimer’s Association during such a critical time of need.”

“Alzheimer’s disease has touched so many people around the country. My passion for change started as my grandfather, a retired Army Attaché, suffered with the disease for more than a decade. Watching how it affects the entire family prompted my initiative for change. I knew I needed to lend my company’s talents to further awareness and important initiatives,” said Christi Tasker, president of the Tasker Agency, the production company responsible for assembling the various teams involved in the project along with coordinating marketing and promotion. “Roxann and I immediately connected with a shared passion for finding a cause for the debilitating disease of Alzheimer’s. I knew she was the one to sell the house and she was more than generous with her offer to give up her complete commission to the cause. She has been a long time advocate of the Alzheimer’s Association supporting their annual fundraising events. We are grateful to have Paul and Donna Moss as key partners in this project, along with Traditional Home’s editors, designers, and all of the sponsors who gave their time, energy, talents and resources. We’re grateful to everyone who attended the Showhouse experience. Without them, the project would not have been a success.”

Both Engel Völkers and Tasker Agency, a division of digital creative agency PuTTin’ OuT, teams globally, are continuing to raise awareness for the Alzheimer’s Association’s research efforts through the #CrissCrossChallenge hosted on Facebook via the new Facebook donation button which distributes monies directly to Alz.org To participate or learn more view: https://www.facebook.com/donate/10208843310910481/

ENGEL & VÖLKERS – dallas.evusa.com
Since its beginning in 1977 as a specialty boutique providing exclusive, high-end real estate services in Hamburg, Germany, Engel & Völkers has become one of the world’s leading companies specializing in the sale and lease of premium residential and commercial property, yachts and private aviation. Engel & Völkers currently operates a global network of over 8,900 real estate advisors in more than 750 brokerages spanning 33 countries across five continents, offering both private and institutional clients a professionally tailored range of luxury services. It established its North America corporate headquarters in 2007 and opened its first brokerage in the same year. Committed to exceptional service, Engel & Völkers supports its advisors with an array of premium quality business services; marketing programs and tools; multiple platforms for mobile, social and web; as well as access to its global network of real estate professionals, property listings, and market data. Engel & Völkers is an active supporter of the Fair Housing Act and the Equal Opportunity Act. Each brokerage is independently owned and operated. The Dallas/Fort Worth Engel Volkers agency is owned and brokered by Roxann Taylor.

About Traditional Home Magazine
As the largest upscale shelter magazine in America, Traditional Home celebrates the union of timeless design with modern living, inspiring almost 5 million design lovers to reinterpret classic elegance in a thoroughly personal way. From home and garden to food, entertaining, and travel, the magazine is a tribute to quality, craftsmanship, authenticity, and family—a trusted resource that respects the past, lives in the present, and embraces products designed for the future. For more information, please visit www.traditionalhome.com.

TASKER AGENCY – www.TaskerAgency.com
Tasker Agency is a multi-faceted branding, marketing, public relations, film, and experiential event production firm focusing on client brand awareness. Working in concert with our sister company, PuTTin’ OuT, a highly successful digital creative agency and social media marketing firm started in the MySpace era, Tasker Agency utilizes the whole spectrum of traditional and digital marketing activities to build or revitalize some of the most notable brands worldwide by producing engaging strategies and alignments to reach consumers in the luxury market.